Заметки на английском: About the Imitation game and ‘different’ people 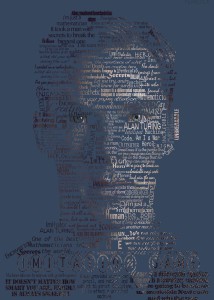 I have been waiting for the Imitation game to become available on the Internet for several months. Finally I could watch it and it surpassed all my expectations!

What I expected? Well, I just wanted to see Benedict Cumberbatch play. I knew the story behind the film but I could never imagine that it would touch me so much. And it did. Not the story about a great machine to decode Nazis’ messages but the story of a man who is not like everybody else, who can do nothing about it and who is punished by the society for being who he is. It is heart-wrenching. I spent last 15 minutes of the film in tears.

I suppose it is the same with films as it is with books. You like a particular film because it strikes a cord with you, it speaks to you. I have been thinking about ‘different’ people recently. How easily we put labels on them and judge them! It is especially relevant for Russia nowadays when homosexuals are not seen as … well as people deserving the same rights. GB has been there 60 years ago. We are there now, in 2015.

And what about people with gender identity disorder, to give another example? I have never heard about them until some days ago when I came across a video on The New Yorker. A transgender youth tells his story. He/she was born a girl but by the age of 14 it became clear to her that she couldn’t live a girl’s life any longer. She told her mother about this and the response was: You can do what you like but not here. And the youth in question found herself in the street. With no money, nowhere to go, nothing. How could a mother do such a thing to her child?! I still have no answer.

I don’t think I can change the world with this small post but if I made you reconsider your attitude to ‘different’ people — that’s a start.

P.S. Check out my other post on ‘different people’ — The Rosie project.