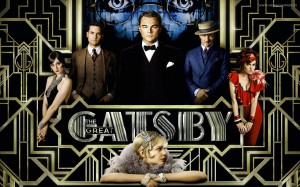 I don’t remember when was the last time I went to the cinema! I was waiting for something special, something romantic but spectacular at the same time.
I knew the time had come when I saw The Great Gatsby trailer. I knew I had to watch it on big screen.
[embedplusvideo height=»417″ width=»692″ editlink=»http://bit.ly/13aY6eY» standard=»http://www.youtube.com/v/TaBVLhcHcc0?fs=1″ vars=»ytid=TaBVLhcHcc0&width=692&height=417&start=&stop=&rs=w&hd=0&autoplay=0&react=1&chapters=&notes=» id=»ep8851″ /]
I wasn’t disappointed.
It may seem from the trailer that there is a bit too much of… everything. And maybe this is true. But it just fits. Because the Roaring Twenties were excessive too. As F. Scott Fitzgerald wrote about New York in the 1920′s: “The restlessness approached hysteria. The parties were bigger. The pace was faster, the shows were broader, the buildings were higher, the morals were looser, and the liquor was cheaper.”
This song accompanies one of the enormous parties Jay Gatsby was giving in his mansion. It makes even me want to dance! All night long))
[embedplusvideo height=»417″ width=»692″ editlink=»http://bit.ly/13aYz0J» standard=»http://www.youtube.com/v/phmz9uRG4E8?fs=1″ vars=»ytid=phmz9uRG4E8&width=692&height=417&start=&stop=&rs=w&hd=0&autoplay=0&react=1&chapters=&notes=» id=»ep4621″ /]
What simply fascinated me in this film was the close attention to details. Take the costumes of Daisy Buchanan — they tell the whole story on their own!
I am very glad I watched the film because it helped me understand the book. I read ‘The Great Gatsby’ about five years ago and it only made me wonder where all the fuss about the novel was coming from. The story left me completely indifferent.
This time I did feel the tragedy behind Jay Gatsby’s story. The film made me feel sorry for him but still I didn’t quite understand why he behaved the way he did. And only the ‘Behind the scenes’ video where Leonardo DiCaprio tells why he was interested to play the role of Jay Gatsby unreveled the truth for me.
As Mr. DiCaprio pointed out «Gatsby’s one of those iconic characters because he can be interpreted in so many ways: a hopeless romantic, a completely obsessed wacko or a dangerous gangster, clinging to wealth.»
I’m not sure it was in the book but in the film we can see an inscription on the gates of the Gatsby’s mansion Ad Finem Fidelis which translates from Latin as Faithful to the Death.
I suppose only ‘a hopeless romantic’ could use this phrase as a motto and I’ll remember Jay Gatsby as one of them, with this song on the background:
[embedplusvideo height=»417″ width=»692″ editlink=»http://bit.ly/13aZlux» standard=»http://www.youtube.com/v/oBJY3Extw1I?fs=1″ vars=»ytid=oBJY3Extw1I&width=692&height=417&start=&stop=&rs=w&hd=0&autoplay=0&react=1&chapters=&notes=» id=»ep6063″ /]
Have you seen this film? How did you feel about it? You are more than welcome to share your experience in the comments!)