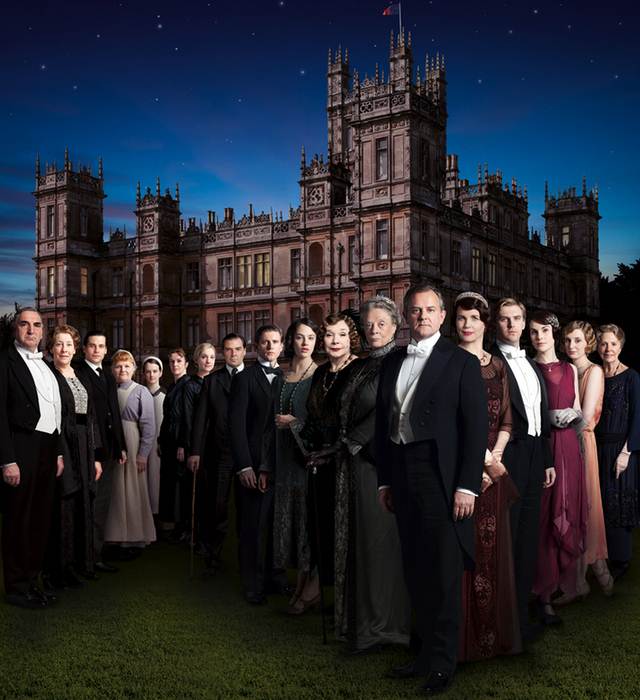 I feel I’m losing the ability to express myself in English, so I better start writing these notes, like I do for Spanish.(be careful, this post contains spoilers for series three) I haven’t been watching almost anything since I saw Being Erica. I liked this series so much that any other film could be a disappointment. But I was sure that the new season of Downton Abbey would’t be. Actually, I was planning to wait until the whole series would be available for downloading. But yesterday I decided I couldn’t possibly wait any longer. It was such a pleasure seeing this costume drama that I longed to experience it again.

Thank God that yesterday I had only one episode downloaded, because if I had had all four I wouldn’t have gone to bed till the very morning. As I expected, nothing had changed and “Downton Abbey” still provokes in me a great desire to put everything else aside and spend as long as it takes to watch all the episodes from start to finish/ in a row. That is to say, this morning I spent in front of my laptop watching poor Edith being broken-hearted again, shedding tears** with Ethel who said her last goodbye to her son, being surprised again and again by the snarky comments** of Cousin Violet, and approving of how delicately Cora can get anything she wants out of her husband without pushing hard.

I love this series because it makes me live through so many different emotions I almost never (thanks God*) experience in my own life.

When I tell somebody about Downton Abbey, somebody that has never heard of it, he or she always asks me “What is it about?”. “Well, I answer, it’s about a huge stately home somewhere on the green loans of England, about it’s owners and their servants”. But in fact it’s much more complicated than this. There is some sort of drama in the life of every one of the characters.

Another reason I enjoy watching this costume drama — the aristocracy is presented the way I always imagined it, especially the older generation. Cousin Violet is one of my favourite characters of the series. I envy her ability to say the right thing at the right moment. She’s a real master of parting short whereas I am the one of esprit d’escalier. She can be a bit harsh sometimes but as we could deduce from previous episodes it is only her way of dealing with things she doesn’t approve of.

Cora represents for me the ideal of a woman. She is gentle, soft, elegant, letting her husband be a man and feel like one (a trait that many women of nowadays lack), but at the same time always getting what she wants. But without any pressure, gently and softly.

Lord Grantham, in my opinion, behaves the way a truly gentleman does. He is reasonable, kind, adores his wife and daughters, knows how to resolve a conflict. Yes, there is a difference between masters and servants but even if they show it they do it in a way so that nobody is hurt.

The very first moment of the first episode of the third series I was struck by the ability of, well everybody, (actors, costume designers, camera men, producers etc.) to creat such an autentic atmosphere. You see Daisy riding an old bike wearing something that only the poor housemaids wore (I suppose) some 100 years ago. You watch her and you can’t even imagine that she is actually an actress and in real life she is not like this at all. When you watch Downton Abbey you forget that the people you see are only actors. Everything seems so real!

I very much enjoyed watching the two worlds, i.e. the British one and the American, clashing**. And these worlds are so very different. In what ways? The British do stick to their traditions. They are not only important but crucial, essential to their survival. Mary tells that she believes that the Countess of Grantham must leave only in Downton Abbey and nowhere else. But her American Grandmother is more pragmatic. And I am on  her side. This house was built for another era, life has changed since then and it’s time to move forward. Also we see that the Americans are more open, just speak their mind without bothering about what others might think. This time I am more on the British side;)

So it’s a shame I don’t live in Great Britain and can’t watch the fifth episode on Sunday evening as the whole British nation will do. But I’m looking forward to Monday to seeing the downloaded episode at home in cold and rainy Saint-Petersburg. Really looking forward))

*It’s strange, I’m not a religious girl but I keep mentioning his name… No wonder that the verb “to swear” developed with the time a second sense of “to use offensive language”.

**Before writing this post I have read four article in the Guardian http://www.guardian.co.uk/tv-and-radio/tvandradioblog/2012/sep/16/downton-abbey-series-three-episode-one and some other website http://blog.zap2it.com/frominsidethebox/2012/10/downton-abbey-season-3-episode-4-spoilers-some-new-faces-at-the-estate.html and picked there some useful phrases which I unfortunately didn’t manage to use in my essay. Some other day.

Some Venn´s Diagrams were mentioned and I was eager to learn what it was all about. Here you have the link too.

to clash — сталкиваться: The clash between the aristocratic old guard and the upstart Americans created a richly entertaining episode, dripping with dark comedy

to have a backbone — букв. иметь позвоночник, т.е. иметь силу воли, решимость: “»I can’t do this! You know it’s wrong!» Blimey. That was a jawdropper. Lord Sir Anthony Strallan-Gormless has a backbone? That I was not expecting.

to pull some strings — пустить в ход свои связи: Robert pulls some strings and manages to keep Tom out of jail, but he can never go back to Ireland, which obviously is a huge problem for Tom.

to come to a head — обострять, усиливать:  Sybil doesn’t see why they can’t just stay at Downton indefinitely to provide a better life for their child, so we fully expect this rift(размолвка) to come to a head.

to turn the tables — поменяться ролями, отплатить той же монетой: Bates turns the tables on Craig, his cellmate, and returns to favor with the guards (except the one helping to set him up).

to shed tears — проливать слезы: While the Ethel storyline was rather annoying for the first few episodes, the scenes in this episode were very well done. Gut-wrenching. A few tears were shed at our house.