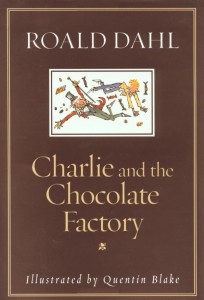 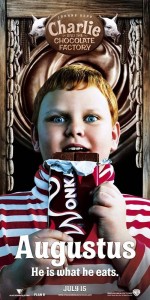 «Augustus Gloop! Augustus Gloop!
The great big greedy nincompoop!
How long could we allow this beast
To gorge and guzzle, feed and feast
On everything he wanted to?
Great Scott! It simply wouldn’t do!
However long this pig might live,
We’re positive he’d never give
Even the smallest bit of fun
Or happiness to anyone.
So what we do in cases such
As this, we use the gentle touch,
And carefully we take the brat
And turn him into something that
Will give great pleasure to us all–
A doll, for instance, or a ball,
Or marbles or a rocking horse.
But this revolting boy, of course,
Was so unutterably vile,
So greedy, foul, and infantile
He left a most disgusting taste
Inside our mouths, and so in haste
We chose a thing that, come what may,
Would take the nasty taste away.
‘Come on!’ we cried, ‘The time is ripe
To send him shooting up the pipe!
He has to go! It has to be!’
And very soon, he’s going to see
Inside the room to which he’s gone
Some funny things are going on.
But don’t, dear children, be alarmed;
Augustus Gloop will not be harmed,
Although, of course, we must admit
He will be altered quite a bit.
He’ll be quite changed from what he’s been,
When he goes through the fudge machine:
Slowly, the wheels go round and round,
The cogs begin to grind and pound;
A hundred knives go slice, slice, slice;
We add some sugar, cream, and spice;
We boil him for a minute more,
Until we’re absolutely sure
That all the greed and all the gall
Is boiled away for once and all.
Then out he comes! And now! By grace!
A miracle has taken place!
This boy, who only just before
Was loathed by men from shore to shore,
This greedy brute, this louse’s ear,
Is loved by people everywhere!
For who could hate or bear a grudge
Against a luscious bit of fudge?» 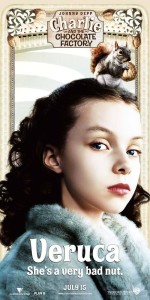 «Veruca Salt, the little brute,
Has just gone down the garbage chute,
(And as we very rightly thought
That in a case like this we ought
To see the thing completely through,
We’ve polished off her parents, too.)
Down goes Veruca! Down the drain!
And here, perhaps, we should explain
That she will meet, as she descends,
A rather different set of friends
To those that she has left behind–
These won’t be nearly so refined.
A fish head, for example, cut
This morning from a halibut.
‘Hello! Good morning! How d’you do?
How nice to meet you! How are you?’
And then a little further down
A mass of others gather round:
A bacon rind, some rancid lard,
A loaf of bread gone stale and hard,
A steak that nobody could chew,
An oyster from an oyster stew,
Some liverwurst so old and gray
One smelled it from a mile away,
A rotten nut, a reeky pear,
A thing the cat left on the stair,
And lots of other things as well,
Each with a rather horrid smell.
These are Veruca’s new found friends
That she will meet as she descends,
And this is the price she has to pay
For going so very far astray.
But now, my dears, we think you might
Be wondering–is it really right
That every single bit of blame
And all the scolding and the shame
Should fall upon Veruca Salt?
Is she the only one at fault?
For though she’s spoiled, and dreadfully so,
A girl can’t spoil herself, you know.
Who spoiled her, then? Ah, who indeed?
Who pandered to her every need?
Who turned her into such a brat?
Who are the culprits? Who did that?
Alas! You needen’t look so far
To find out who these sinners are.
They are (and this is very sad)
Her loving parents, MUM and DAD.
And that is why we’re glad they fell
Into the garbage chute as well.» 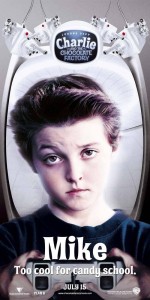 The most important thing we’ve learned,
So far as children are concerned,
Is never, NEVER, NEVER let
Them near your television set —
Or better still, just don’t install
The idiotic thing at all.
In almost every house we’ve been,
We’ve watched them gaping at the screen.
They loll and slop and lounge about,
And stare until their eyes pop out.
(Last week in someone’s place we saw
A dozen eyeballs on the floor.)
They sit and stare and stare and sit
Until they’re hypnotised by it,
Until they’re absolutely drunk
With all that shocking ghastly junk.
Oh yes, we know it keeps them still,
They don’t climb out the window sill,
They never fight or kick or punch,
They leave you free to cook the lunch
And wash the dishes in the sink —
But did you ever stop to think,
To wonder just exactly what
This does to your beloved tot?
IT ROTS THE SENSE IN THE HEAD!
IT KILLS IMAGINATION DEAD!
IT CLOGS AND CLUTTERS UP THE MIND!
IT MAKES A CHILD SO DULL AND BLIND
HE CAN NO LONGER UNDERSTAND
A FANTASY, A FAIRYLAND!
HIS BRAIN BECOMES AS SOFT AS CHEESE!
HIS POWERS OF THINKING RUST AND FREEZE!
HE CANNOT THINK — HE ONLY SEES!
‘All right!’ you’ll cry. ‘All right!’ you’ll say,
‘But if we take the set away,
What shall we do to entertain
Our darling children? Please explain!’
We’ll answer this by asking you,
‘What used the darling ones to do?
‘How used they keep themselves contented
Before this monster was invented?’
Have you forgotten? Don’t you know?
We’ll say it very loud and slow:
THEY… USED… TO… READ! They’d READ and READ,
AND READ and READ, and then proceed
To READ some more. Great Scott! Gadzooks!
One half their lives was reading books!
The nursery shelves held books galore!
Books cluttered up the nursery floor!
And in the bedroom, by the bed,
More books were waiting to be read!
Such wondrous, fine, fantastic tales
Of dragons, gypsies, queens, and whales
And treasure isles, and distant shores
Where smugglers rowed with muffled oars,
And pirates wearing purple pants,
And sailing ships and elephants,
And cannibals crouching ’round the pot,
Stirring away at something hot.
(It smells so good, what can it be?
Good gracious, it’s Penelope.)
The younger ones had Beatrix Potter
With Mr. Tod, the dirty rotter,
And Squirrel Nutkin, Pigling Bland,
And Mrs. Tiggy-Winkle and-
Just How The Camel Got His Hump,
And How the Monkey Lost His Rump,
And Mr. Toad, and bless my soul,
There’s Mr. Rat and Mr. Mole-
Oh, books, what books they used to know,
Those children living long ago!
So please, oh please, we beg, we pray,
Go throw your TV set away,
And in its place you can install
A lovely bookshelf on the wall.
Then fill the shelves with lots of books,
Ignoring all the dirty looks,
The screams and yells, the bites and kicks,
And children hitting you with sticks-
Fear not, because we promise you
That, in about a week or two
Of having nothing else to do,
They’ll now begin to feel the need
Of having something to read.
And once they start — oh boy, oh boy!
You watch the slowly growing joy
That fills their hearts. They’ll grow so keen
They’ll wonder what they’d ever seen
In that ridiculous machine,
That nauseating, foul, unclean,
Repulsive television screen!
And later, each and every kid
Will love you more for what you did.

«Dear friends, we surely all agree
There’s almost nothing worse to see
Than some repulsive little bum
Who’s always chewing chewing gum.
(It’s very near as bad as those
Who sit around and pick the nose).
So please believe us when we say
That chewing gum will never pay;
This sticky habit’s bound to send
The chewer to a sticky end.
Did any of you ever know
A person called Miss Bigelow?
This dreadful woman saw no wrong
In chewing, chewing all day long.
She chewed while bathing in the tub,
She chewed while dancing at her club,
She chewed in church and on the bus;
It really was quite ludicrous!
And when she couldn’t find her gum,
She’d chew up the linoleum,
Or anything that happened near–
A pair of boots, the postman’s ear,
Or other people’s underclothes,
And once she chewed her boy friend’s nose.
She went on chewing till, at last,
Her chewing muscles grew so vast
That from her face her giant chin
Stuck out just like a violin.
For years and years she chewed away,
Consuming fifty packs a day,
Until one summer’s eve, alas,
A horrid business came to pass.
Miss Bigelow went late to bed,
For half an hour she lay and read,
Chewing and chewing all the while
Like some great clockwork crocodile.
At last, she put her gum away
Upon a special little tray,
And settled back and went to sleep–
(She managed this by counting sheep).
But now, how strange! Although she slept,
Those massive jaws of hers still kept
On chewing, chewing through the night,
Even with nothing there to bite.
They were, you see, in such a groove
They positively had to move.
And very grim it was to hear
In pitchy darkness, loud and clear,
This sleeping woman’s great big trap
Opening and shutting, snap–snap–snap!
Faster and faster, chop–chop–chop,
The noise went on, it wouldn’t stop.
Until at last her jaws decide
To pause and open extra wide,
And with the most tremendous chew
They bit the lady’s tongue in two.
Thereafter, just from chewing gum,
Miss Bigelow was always dumb,
And spent her life shut up in some
Disgusting sanatorium.
And that is why we’ll try so hard
To save Miss Violet Beauregard
From suffering an equal fate.
She’s still quite young. It’s not too late,
Provided she survives the cure.
We hope she does. We can’t be sure.»

I never saw a girl or boy
So prone as Sophie to destroy
Whate’er she laid her hands upon,
Though tough as wood, or hard as stone;
With Sophie it was all the same,
No matter who the thing might claim,
No matter were it choice or rare,
For naught did the destroyer care.
Her playthings shared the common lot;
Though hers they were, she spared them not,
Her dolls she oft tore limb from limb,
To gratify a foolish whim.

‘Fie!’ said her mother, ‘don’t you know,
That if you use your playthings so,
Kriss Kringle will in wrath refuse
To give you what you might abuse?
Remember, how in times gone by,
You’ve always found a rich supply
Of Christmas presents; but beware,
You’ll find no more another year.’

You’d think such words would surely tend
To make this child her ways amend.
But no; she still her course pursued,
Regardless of advice so good.
But when her mother sees ’tis plain
That all her arguments are vain,
Says she, ‘Since I have done my best,
I’ll let experience do the rest.’
Meantime the season of the year
For Christmas gifts was drawing near,
And Sophie doubted not that she
An ample store of them would see.
At length the happy hour was come.
The children, led into the room,
Behold, with wonder and surprise,
Three tables set before their eyes.
One is for Nelly, one for Ned,
And both with choicest treasures spread.